Australia’s housing market continues to throw up its regular ‘remarkables’. Right now, one of the features most remarked upon is that dwelling approvals in Victoria have grown very quickly and in just a year, have out-stripped those in New South Wales.

Sure, this is a population and economic prospects thing, but its also a policy consideration, and one we would do well to fully understand.

First, to the numbers.

To be absolutely clear, new home approvals across Australia grew by a solid 1.8% over the last year, totalling 227,900 separate approvals for the year-ended April. The market is stronger than anyone expected, and though there are headwinds in financing the loans of tomorrow, the approvals continue thick and fast.

But across the country, it’s a patchy story. Approvals in New South Wales are down 3.8% compared with the year-ended April 2017, and in Queensland its 1.6% and Western Australia, 7.0%. Meantime, approvals in Victoria rose 11.7% and in South Australia, they were up 10.2%.

These changes are shown in the chart, which emphasise the Victorian uprising. 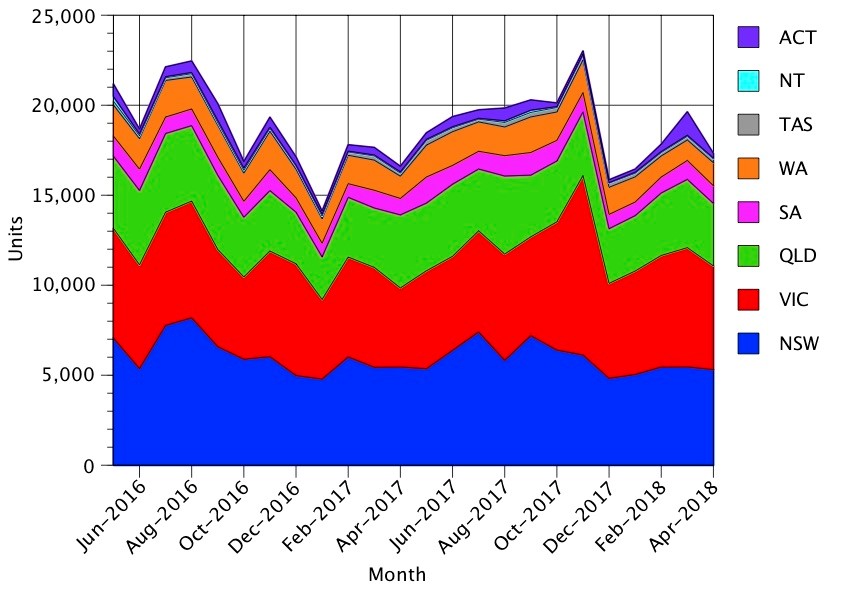 What the chart cannot do is explain the situation, and why it arises.

One reason for that is that housing markets are very complex, because in many respects, pretty much every household is focused on how it gains and maintains private home ownership. Housing is at the core of our economy, and so, everything in the economy impacts on it.

The big driver – always has been, always will be – is population. No surprises then that Victoria has the fastest growing population in Australia. Interest rates matter of course, but tend to be more economy wide, than focused on a single state or region. Employment, and future employment prospects, are fundamental to housing approvals – so the Submarine building program has something to do with South Australia’s revival, we suspect.

A final factor to consider, for today anyway, is land release programs. State governments and local councils release land on a sophisticated and planned basis, signaled many years in advance. If you haven’t done so, it is worth checking out your State’s planning authority website, or in regional areas, your local Shire’s website.

So how does that explain Victoria’s rise relative to pretty much every other state?

Victoria’s population is growing with net migration (from other states, as well as overseas) on the rise. Land has been released (and rezoned where needed, in key corridors) progressively over close to a decade, with a pipeline of developments continuing to come on line. It is the employment prospects question that confounds in Victoria. Along with South Australia, it is often considered Australia’s manufacturing ‘rust belt’.

There are solid drivers of employment in Victoria. A large infrastructure spend that will span a decade and link the city are part of that, as are post-industrial jobs in the food sector covering everything from growing technologies to packaging and the materials (including plastics and paper and cardboard) that are needed to ship the region’s food to other regions and around the world.

All of that – and more – is feeding into a housing market that is growing strongly right now and has prospects of continuing for at least a while yet.

When we examine housing markets, increasingly we have to look at Australia at a state and even regional level, and especially, at the broader economy – that’s where we will find the clues to guide us in our day-to-day business.

Tim Woods is Managing Director of IndustryEdge, the leading wood products, forestry and pulp and paper market analysts in Australia. The company publishes the monthly Wood Market Edge, a detailed analysis of forestry and wood product markets. For more information, go to www.industryedge.com.au