Congratulations must go to the amazing Multinail team for their successful Conference and Machinery Expo held at their new offices in Staplyton.

The conference was held in their spacious new facilities which comfortably…well perhaps a tiny bit squeezy but that’s because there was approximately 100 people in attendance. Apart from the FTMA Australia conferences I think this event would have attracted the most number of fabricators from varying states and it was exceptional to see such strong networking.

FTMA Australia had the pleasure in presenting in the dreaded slot before lunch so it was kept short and quick to the point with plenty of passion as I outlined the new FTMA Strategic Plan and the key issues such as training, mid-rise development and waste to name a few of the areas being targeted in the coming year.

FTMA received great feedback on the direction we are going and it has resulted in 10 new members in the past 4 months (2 Victoria, 2 NSW & 6 QLD) with over half coming from fabricators at the Multinail Conference.

My favourite topic covered was presented by Susanne Bransgrove of Families in Transition. Susanne, who is the founder of the company spoke of the difficult task of transitioning the family business successfully.

Multinail, who of course are a family business, have engaged the services of Susanne as their family continues the transition through successful generations. There were also many in the audience who were nodding or laughing at varying stages as they related to the situations presented by Susanne.

Reflecting on this presentation the following morning with delegates had me in stitches as they discussed the Sunday family roast.

“Sunday Roast, I had that every week.  It went something like……”why aren’t you bloody working you lazy bastard”.” 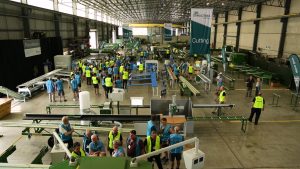