When I came into the job back in 2009, I was fortunate enough to meet so many great down to earth people who make up our wonderful industry.

Two of these wonderful souls were Julie & Fred McDonald from Beaudesert Frame and Truss who I clicked with immediately.  It may be because of their laid-back nature, their friendly disposition, or the fact that, like me, they are mad Rugby League fans, even if it is the Broncos!

Like many fabricator businesses within our industry, Beaudesert Frame & Truss has been a family operation. Fred was born and bred in Beaudesert. His father Arthur ran a small building business from their home. Arthur did his apprenticeship with his father George so Fred was the third generation of the family to enter the industry. 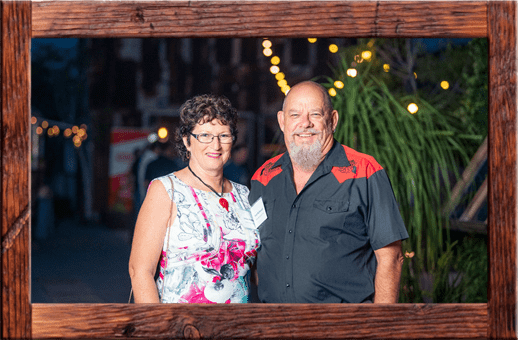 Around 1979, Arthur could see the advantages of plated roof trusses and he began manufacturing the trusses using ply gussets, which was quite a forward-thinking initiative of the day.

With sales kicking off Arthur decided to bite the bullet and purchased a block of land in the new industrial estate where he built their frame and truss plant.  It was around this time that Fred joined his dad as an apprentice carpenter and at the young age of 21, he married Julie.

Their first contact at Pryda was Chris Rogers who was instrumental in setting up the business as he oversaw and advised them on the right equipment to install, the factory layout and of course the all-important training. At this time there were no computers and Fred was trained using a HP97 Programmable Calculator.

“The McDonald family have been amazingly committed to the industry and to those that they have dealt with.”

Chris added “that it had been an enormous pleasure to work and spend time with the family for forty years and three generations.”

The factory was completed in 1981 and they continued to run the frame and truss plant along side the construction business until it closed in 2000, when they decided to concentrate on the truss plant.

Julie and Fred have two kids, Scott 39, and Jayde 37.  Scott is a motor trimmer by trade and is now in to the earthworks industry, whilst Jayde, who began working in Brisbane, was encouraged to do an aptitude test for truss design and she was a natural and has been with the business since the early 2000’s. Jayde says she was always fairly good at maths and liked the work straightaway.

The family business is part of the community and at work they have a running joke whenever anyone comes in…..’oh, you know, you went to school with so and so, or you married such and such’ as everyone knows everyone.

Fred and Julie’s greatest achievements are their children and their beloved Grandchildren. Scott married Lesley and they have two kids Jackson 8 and Olivia 6 and Jayde married Scott and they also have two kids Ivy 7 and Angus 2.

Jayde says she has loved working in the business with her parents and that they have been amazing role models with strong work ethics and beautiful family values.  The perfect role models in every aspect, not just business wise but in every way.

Jayde is staying on with the new owners whilst Fred and Julie are looking forward to retirement where they will get to spend more time with their grandchildren.

FTMA Australia thanks Fred & Julie for supporting the Association and wish all you all the best for your retirement and hope you enjoy the time with the Grandchildren and find time to begin your travels, COVID-19 permitted of course!